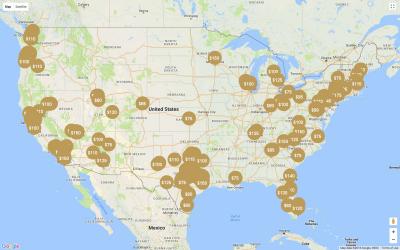 Where's the bikes at? Twisted Road hire opportunities in the United States

Jan 29, 2018  _  Twisted Road offers a vision of a motorcycling utopia where bike owners all across the United States put their bikes up for rent, and riders have their pick of wheels wherever they travel to. But something about the idea makes us deeply uncomfortable.

The system is fairly simple; you've seen it before with Airbnb, but this time it's your motorcycle you're putting up for hire.

The benefits to renters are obvious: motorcycle rental shops are few, far between and seemingly always across the other side of town where they're a pain in the butt to get to. Twisted Road, a startup out of Winnetka, Illinois, dots bikes all across the map, and you can arrange a convenient pick up/drop off point with the owner. This could all but eliminate that sad, mournful face a motorcyclist makes when he's forced to experience the local twisty roads behind the windscreen of a hire car.

For the bike owners, it's a bit more complex. Certainly, there's a lot of bikes out there lying fallow for days, weeks or even moths at a time. And there's plenty of people with more bikes than bums to put on them. A service like this can turn those depreciating liabilities into money-earning assets. Heck, over time, a bike could even pay for itself, and we all like free motorbikes.Twisted Road CEO Austin Rothbard, on a bridge with his Moto Guzzi

But on the other hand, people get a bit weird about their bikes. I know an embarrassing amount of people who give them names. I've had friends tell me "it's mine, and I'll wash it as often and as fast as I like." Come to think of it, that guy might not have been talking about his motorcycle. But the point stands.

I've seen the sad-faced motorcycles at the bike hire shop in my town, the grated-cheese finish on their side fairings, mirrors, panniers, engine covers and bar ends. And on the hand and foot levers, and the tanks, and somehow even the instrument clusters. Seems to me hire bikes get hard lives, perhaps not the sorts of lives you'd want for your own two-wheeled children.

Twisted Road addresses this by requiring riders to provide their own insurance card details for anything that happens out there, relying on the fact that American insurance policies apparently cover you when you ride other people's bikes, which strikes me as odd. Additionally, riders need to fill out a comprehensive riding profile showing bike owners what they've ridden before, and for how long. Thus you can decide that buttocks that have touched Hyosungs shall never touch your Harley, or rule out a certain class of rider on the basis of too many Gixxers in their pedigree.Daily hire prices seem to range from around US$80-180, and are set at the discretion of...

International riders don't need their own insurance, according to Twisted Road CEO Austin Rothbard, but do need to put down a deposit on their credit card. If anything goes wrong and the rider's insurance is denied, Twisted Road has its own insurance policy to make sure owners don't end up out of pocket. And there's a long list of prohibited acts riders are forbidden perform on vehicles, including wheelies, burnouts, riding with the wrong pressure in the tires or while sending texts.

Perhaps, when you're face to face shaking hands with a guy that's renting you his own pride and joy, you might treat him and his wheels differently to a grunt behind a counter somewhere. Perhaps, if there's hope to be had in human nature, these bikes will get treated better than rental rentals.

Rates are set at the discretion of the owners, and seem to range between US$75 and US$180 a day. The service has been online for just a few months at this stage, and it's US-only for the time being. There's only 268 bikes in the system right now, and they all show up, no matter what city you search in, with the closest ones appearing first. They seem to be concentrated around major cities at this point, and there's some pretty interesting machines on offer – I'm lookin' at you, sexy little CBR1000RR streetfighter in Utah. We may well meet someday.An interesting hire bike listing at Twisted Road.

I am cautiously optimistic about this one. I'm lucky enough to have more bikes than backsides at the moment and I think if the service came down under, I'd be likely to list a couple to make a few bucks and see who I might meet in the process. But I'd also fully expect to be slapped in the face if I suggested my buddies try the same.