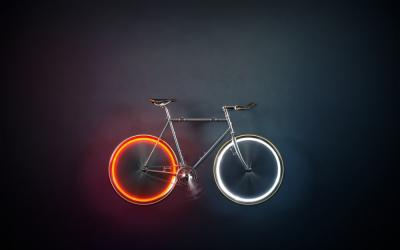 Feb 2,  2018  - You've doubtless seen those little LEDs that can be fastened to a bicycle's spokes, that create a ring of light when the wheel is spinning. While they do make the bike much more visible at night, they're one more thing that needs batteries. Arara wheel lights, however, are powered by frame-mounted magnets.

Created by Siberian physicist Semyon Filippov, each Arara light contains an LED and a capacitor that repeatedly passes by a set of neodymium magnets mounted beside the wheel. As long as the wheel keeps turning, that capacitor retains a charge via magnetic induction. Even when the bike is stopped, the LED will stay lit for a few minutes.

And while there's no physical contact between the magnets and the light, a slight amount of drag is still created, although it's reportedly "negligible."Arara lights are said to be water-resistant, lightweight, and will work at temperatures down to -15...

The lights are said to be water-resistant, lightweight, and will work at temperatures down to -15 ºF (-26 ºC). They'll be available in six colors – two or four lights go on each wheel, depending on how bright the rider wants to make things.

If you're interested in getting a set, they will be the subject of an Indiegogo campaign that's scheduled to begin on Feb. 13th. Assuming that project is successful, production should start in the fourth quarter of this year. Filippov tells us that estimated retail pricing is US$85 for four lights with magnets, or $190 for eight – although early subscribers who register their interest via the link below (before the 13th) will get a 20 percent discount.

The lights are demonstrated in  this video.