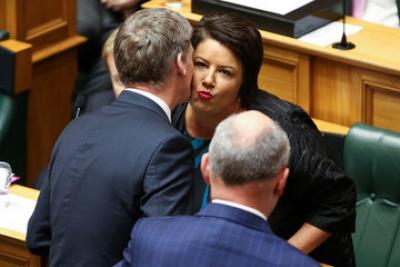 Duo master every contingency. But honeymoon will be brief

The pending official emergence of the new top two at the helm of New Zealand’s National government confirms the National Party’s routine boast that it represents the cross section of the nation’s electorate.

The new top team of Bill English and Paula Bennett has been crafted by outgoing premier John Key with the active assent of his leading lieutenants, notably Murray McCully, the foreign minister – strategist.

She is posh and she is working class. She carries one of the most aristocratic of names in the Maori sphere, Bennett.

She is a solo mother whose early career was janitorial, she was a dishwasher for a while, before she segued into the social studies academic world.

She has the essential component for success in politics which is luck having fallen into the aegis of National strongman Murray McCully while working for him in a secretarial role.

Like her pending boss Bill English she is at one and the same time a professional politician or not a career politician which ever way you look at it.

The point being that she is not an immediate candidate for what has now become a bad brand, that of professional politician.

She fits the generational identi-kit being still comfortably in her 40s. She has the experience, having entered parliament in 2005.

Her cabinet career has been characterised by urban social issues portfolios which she has handled with a smiling equanimity in spite of the inevitable incendiary episodes which such roles must traverse.

The honeymoon though will be brief.

The pair must confront a low-level radiation of opposition from Her Majesty's official Opposition.

But their biggest worry will be the more elusive cabal within their own party led by Mrs Judith Collins in the Brutus role.

In a cross-bencher sense they must also confront lurking like a Muldoon-era wraith in his own perennial Shakespearean role the brooding King of Coalition, Winston Peters MP.

Outside parliament and the party structure they must devote a weather eye to the activities of prairie populist Gareth Morgan.

Drawing attention to National’s embedded technique of burying the nasty issues under the carpet of face-value prosperity.

Think here of things such as entitlements, national debt, immigration, ........

One could go on.

But let's not spoil that honeymoon.