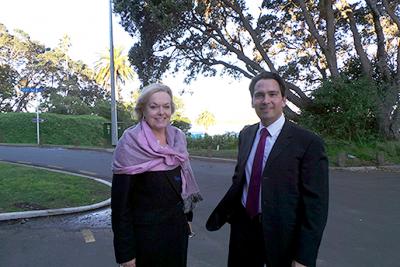 Now to the other rebel Mr Simon Bridges MP, minister of transport.

He is a good-looking boyish chap.

He is of a definable National Party type which is known and categorised as being too clever by half.

The new leadership duo by nature are conciliatory. They will be tempted by inclination to overlook his premature and youthful power grab..

Then as the evening wears on and the Beehive cat has been put out, they will remind themselves of the first rule of being in power.

It is that once you have power then you must use it.

As the sun begins to set they will remind themselves of the second rule.

You must also be seen to be using it.

Cohesion, or at least the external perception of it, is central to the National Party

So it is now that Mr Bridges will find himself confronting a tour on the back benches where his presence will be a highly visible example to anyone else in the National government contemplating breaking the ranks.

The National Party though believes in second chances and thus in redemption.

So as 2017 advances and the general election looms so will the need to attend with still greater intensity to electoral window dressing, of the type that requires a 40 year old mediagenic type such as Mr Bridges.

With his international legal qualifications who better pre-election than Mr Bridges to take over the always troublesomely delicate portfolio of minister of police?

More in this category: « National Government Dream Team Debuts We predicted Judith Collins as Revenue Minister »
back to top
Mar 12, 2018