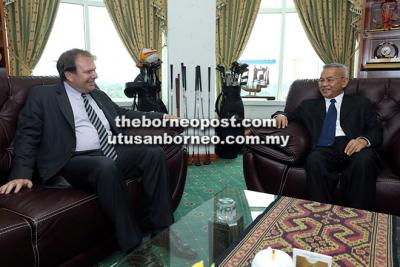 KUCHING: New Zealand is keen to further enhance its ties with Sarawak, especially in the areas of education and tourism.

Its High Commissioner in Malaysia Dr John Subritzky said given there are many Malaysians coming to New Zealand to study, education is something that his country and Sarawak can work on a lot more.

Subritzky said the purpose of his visit to Sarawak is to meet a wide range of government, business and political leaders, exploring how New Zealand and Sarawak are able to further enhance their ties, especially in areas such as trade, cultural and indigenous links aside from education and tourism.

“Sarawak and New Zealand share particularly warm links through the Colombo Plan and the deployment of New Zealand defence force personnel in support of Sarawak’s defence during the Confrontation.

“Indeed, my visit will coincide with a visit to Kuching of New Zealand veterans from the Emergency and Confrontation conflicts, probably the last visit they will do as a group to Malaysia,” he said after paying a courtesy call on Minister in the Chief Minister’s Office (Integrity and Ombudsman) Datuk Talib Zulpilip at the latter’s office here yesterday.

Subritzky said he was glad to have the opportunity to celebrate the 60th anniversary of the relationship between New Zealand and Sarawak, and Malaysia as a whole.

He noted that New Zealand and Malaysia shared an enduring friendship based on strong political, economic, education and tourism links.

Subritzky is here for an official visit until tomorrow.

More in this category: « EU and UK zero in on their first Brexit agreement: food quotas Zespri says goodbye to reefers »
back to top
Aug 30, 2018