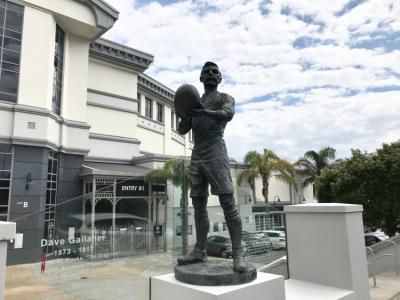 Goff's jam-packed itinerary included presenting the mayor and council of Zonnebeke in Belgium a miniature version of the bronze statue of All Black Dave Gallaher that stands outside Eden Park. Photo: Tim Murphy

Nov 22, 2017  -  In politics, timing is everything. So it might have been inopportune amid a faux furore over Auckland Council business-class travel spending for Mayor Phil Goff to have to made public the details of his two-week sojourn to Europe and Britain.  Goff, however, has been around too long in the public eye, and is too much of a swot, to allow his time astride the world stage to be portrayed as some cosy junket writes Tim Murphy on Newsroom.

Instead, in full-press workaholic mode, he has revealed in a written report to councillors an eye-watering work programme of research on transport and housing and of diplomacy on climate change and World War 1 commemorations.

His 15-page note supplemented by photographic evidence and graphs, even explains that both Goff and an adviser's return airfares to Europe and accommodation in France were paid for by the global Bloomberg philanthropic foundation. (For completeness, that charity deemed business-class appropriate for a travelling public official).

What did the mayor - and the public - learn from the former foreign minister's return to a jet-setting life?

* He may have uncovered a "major New Zealand expatriate investor who is interested in investing in large-scale, built-to-rent developments to help alleviate Auckland's housing shortage. Goff's report says Kent Gardner, of multi-billion dollar investment company Evans Randall, is returning to New Zealand and is interested in projects here similar to those the company developed in the UK. "His goal is to build good-quality long-term rentals with secure tenure, including some social housing. This could represent a major opportunity to increase housing stock to address Auckland's housing shortage."

* He met New London Architecture, an independent forum for discussion on design and planning for the city, which has used 3D technology to create a 12.5 long metre scale model of London, showing in miniature the city's full 85 square kilometres. Notably, Goff says the Auckland Design Office is working with AUT on a similar model for Auckland.

* He had four and a half hours with the chief executive of Transport for London, Mike Brown, and his officials, learning that rubber-wheeled trains that can run along roads without the cost of tram-tracks were not the cost savers some think, because roads have to be strengthened to take the weight of the trams, they need power and the rides are not comfortable. TFL's experience also helped persuade Goff that elevated light rail costs four times as much as grade-level light rail - and underground light rail cost ten times that on the ground. "These costs largely rule out these options for Auckland."

* From TFL, the mayor also learned that autonomous vehicles were "highly . . .

More in this category: « The Ministry of Business, Innovation and Employment release of the 36th America’s Cup: High Level Economic Assessment Evaluation Towards a fairer tax system - Tax Working Group Terms of Reference announced »
back to top
May 23, 2018