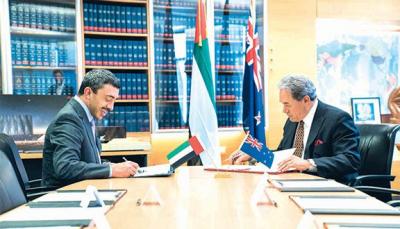 During the meeting, the two sides discussed means to advance relations between the UAE and New Zealand, and to strengthen frameworks of cooperation across various sectors, including the trade and investment, energy and renewables, and food security. They also exchanged views on the latest regional and international developments, along with issues of mutual concern.

The two sides signed a partnership agreement between the governments of the UAE and New Zealand. They also witness the signing of an agreement on the exchange of information and cooperation in the banking sector between the UAE Central Bank and the Reserve Bank of New Zealand.

Sheikh Abdullah was also briefed on the New Zealand pavilion design and layout for Expo 2020 Dubai. The meeting was attended by Saleh Ahmed Alzreem Al Suwaidi, the UAE Ambassador to New Zealand.

During the meeting, the two sides reviewed bilateral ties between the two countries and means of enhancing them across various sectors.

Sheikh Abdullah bin Zayed highlighted the depth of relations between the UAE and New Zealand, expressing his hope for further development and advancement.

On the sidelines of the meeting and in conjunction with the Year of Zayed, Sheikh Abdullah paid tribute to the Minister of Justice’s late father, for his services to the UAE in the Trucial States forces in Al Ain in the 1950s and 60s. His Highness extended a letter of thanks to the Little family in recognition of the great services provided by their father, who contributed to enhancing security and stability in the region.

More in this category: « New Zealand disappointed over US steel tariff move Record exports cut US trade deficit to $49 billion »
back to top
Oct 21, 2018