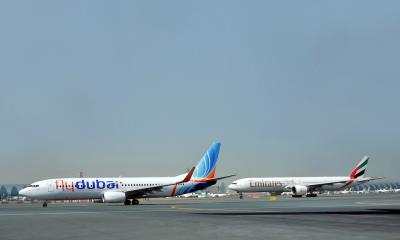 Emirates and flydubai have unveiled an extensive partnership which will see the two Dubai-based airlines join forces to offer customers unmatched travel options.

Both airlines will continue to be managed independently, but will leverage each other’s network to scale up their operations and accelerate growth.

The two airlines will also further develop their hub at Dubai International, aligning their systems and operations to ensure a seamless travel experience through the ultra-modern airport; currently the world’s busiest for international passengers.

HH Sheikh Ahmed bin Saeed Al Maktoum, Chairman and Chief Executive of Emirates Group and Chairman of flydubai, said: "This is an exciting and significant development for Emirates, flydubai, and Dubai aviation. Both airlines have grown independently and successfully over the years, and this new partnership will unlock the immense value that the complementary models of both companies can bring to consumers, each airline, and to Dubai.”

The partnership is working to optimise the networks and schedules of both airlines, to open up new city-pair connections offering consumers greater choice. Additionally, this will help both airlines feed more traffic into each other’s complementary networks. By 2022, the combined network of Emirates and flydubai is expected to reach 240 destinations, served by a combined fleet of 380 aircraft.

The Emirates and flydubai teams are working together on a number of initiatives spanning commercial, network planning, airport operations, customer journey, and frequent flyer programmes alignment.

The partnership will be rolled out over the coming months, with the first enhanced code-sharing arrangements starting in the last quarter of 2017. Further details will be communicated as they become available.

Fully owned by the Investment Corporation of Dubai (ICD), both Emirates and flydubai are operated independently and under separate management teams.

Since launching its operations in 2009, flydubai has: