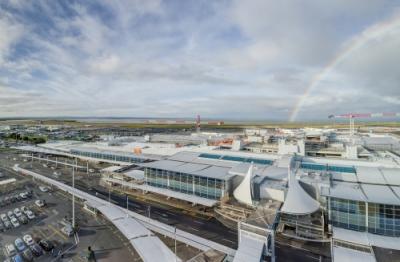 Auckland Airport has confirmed that a Mott MacDonald-led consortium will spearhead the design of its new integrated terminal.

The consortium, which also includes Grimshaw, Architectus and Holmes Consulting, has been appointed to concept design a combined domestic and international terminal at the New Zealand gateway.

The project forms part of the airport’s Terminal Development Plan, which aims to provide an expanded single terminal to accommodate further growth in international and domestic air travel.

Auckland Airport has experienced significant growth in passenger numbers over recent years and has committed to building a world-class airport that can serve New Zealand in the years to come.

The scope of the design project covers building works over the next 10 years. This includes the new integrated domestic terminal, a significant expansion of border processing and the integration of extensive new transport and car parking facilities.aucklandwebThe concept design of the terminal is expected to be completed in early 2018.

Mott MacDonald will be responsible for the overall airport planning and design leadership, as well as all engineering disciplines, with structural and fire engineering provided in partnership with Holmes Consulting.

Grimshaw and Architectus will act as a single architectural provider to the team.

"In addition to specialist experience and knowledge, the consortium’s architects have a proven record of successfully bringing local cultural influence into the fabric of their passenger focused design.

"This is a significant factor for us as we build a world class airport with a uniquely New Zealand feel.”image001 copyIan Guy, Mott MacDonald’s head of aviation for Australia and New Zealand, comments: “This is a tremendously exciting project that will further enhance Auckland Airport's standing as a key hub in the Asia-Pacific region and the gateway to New Zealand.

"To deliver this concept design, we will draw on our experience at other strategically important airports such as London Heathrow, Hong Kong International Airport and Changi Airport in Singapore.

"We have brought together a multitalented consortium that can’t wait to apply its collective creativity to design an airport that New Zealanders will be proud of and visitors will admire.”

This Auckland Airport commission builds on Mott MacDonald’s contribution to major projects in New Zealand over the last five years.