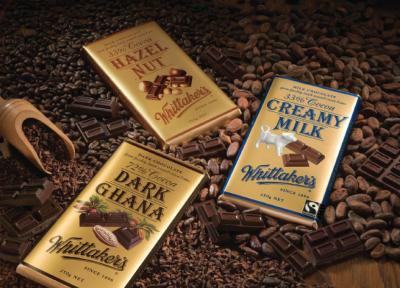 Whittaker's, a premium brand of chocolate in the Land of the Long White Cloud has established a foothold in the Fijian market thanks to an exclusive distribution deal with the Motibhai Group.

Whittaker's head of international markets Matt Whittaker who visited the country this week on a market-familiarisation trip, said he was very impressed with the response from Fijian customers.

"We're delighted to now have this opportunity to build our relationship with chocolate lovers in Fiji via the strong distribution network of Motibhai Group and Prouds retail outlets," he said.

Mr Whittaker said while more established brands in the Fijian market would prove to be a challenge, Whittaker's unique manufacturing process and taste would ensure local chocolate lovers would take to the brand.

"As a family and as a company, we are steadfastly committed to producing only chocolate of the highest quality.

"Whittaker's ensures quality by controlling the whole manufacturing process — from bean to bar — from our one factory in Wellington, New Zealand."

Mr Whittaker said the brand was available in 20 markets around the world with the biggest being Australia followed by Malaysia, China and Canada.

"Of strategic importance is the North American and Asian markets and for the Pacific, one of them is Fiji.

"I think Fiji is going to be exponential — we have already seen four times the sales in the first year with Motibhai and its really exciting days ahead for us.

"In the New Zealand market, we are number two approaching number one and we are market leader in the categories we compete in."

"Whittaker's were doing some supplying to some companies in Fiji directly before but about two months ago they nominated the Motibhai Group as their distributor in Fiji," he said.

"And that's how we came into partnership with Whittaker's.

"So Motibhai is the main distributor of Whittaker's in Fiji and we will be distributing through our Prouds stores, supermarkets and in time to come petrol stations as well."