Air New Zealand Is Coming After Americans With A Talking, Flying Kiwi 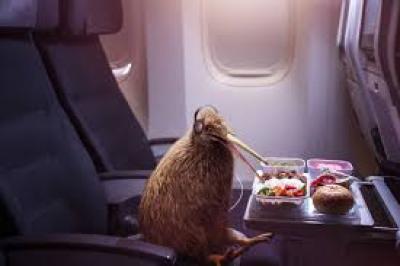 The small airline known for its innovations and kooky safety videos is taking its first big swing at the fast-growing U.S. and Canadian market writes Melissa Locker for Fast Company.

Air New Zealand has a thing or two to teach Americans. First and foremost: that a kiwi is a type of bird, it’s not extinct, and despite being flightless, it is capable of flying perfectly well—at least when strapped into one of Air New Zealand’s coach seats.

In the plucky airline’s first global brand campaign aimed at U.S. and Canadian residents—starring a talking kiwi named Pete who is voiced by Jurassic Park’s Sam Neill—Air New Zealand will teach travelers all about the wonders of the kiwi bird and encourage them to follow their dreams to New Zealand (hopefully, on a certain airline).

The campaign is part of a concerted push for a growing number of American visitors. “Air New Zealand is probably the premium airline that you’ve probably never heard of living in America,” says Air New Zealand’s CEO, Christopher Luxon. “I would argue it’s the most successful airline in the world, by commercial results, customer results, and cultural results.” Some numbers may back him up: In 2016, Air New Zealand posted record profits of $663 million (which it shared with its staff in the form of bonuses) and the airline has been named Airline of the Year for the last four years in a row by the review website AirlineRatings.com.

More in this category: « Watch passengers compete in toilet roll race to get off plane TravelChain Launches World’s First Decentralized Data Exchange For the Travel Industry »
back to top
Mar 26, 2018