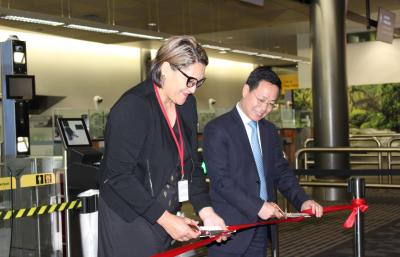 20 Nov 2017  - The first Chinese travellers to officially use the Customs eGates (formerly known as SmartGate) have been welcomed at Auckland International Airport.  Customs Minister Meka Whaitiri and representatives from the Chinese government joined staff and key partners to mark the milestone. “Customs is part of a multi-agency group, working collaboratively to make eGates available to more nationalities. China is our second largest visitor market, and has contributed to the strong growth in visitor numbers in recent years. So extending the use of eGate facilities to eligible Chinese passport holders makes sense.” “The expansion of eGates to Chinese passport holders will help enhance the quality of their experience as visitors to New Zealand,” says Ms Whaitiri. Customs Acting Comptroller, Christine Stevenson says expanding eGates to more countries will help to manage the increasing number of travellers arriving and departing New Zealand. “By allowing eligible passengers to complete their Customs and Immigration checks quickly and easily, it also enables Customs officers to focus on travellers who may present a higher risk,” says Ms Stevenson. “More than 24 million people have used Customs’ eGates since they were introduced at New Zealand airports in 2009, and China is the sixth country that we’ve extended the service to. “Our e-Gates are available in Auckland, Wellington, Christchurch, and Queenstown to eligible ePassport holders aged 12 years and over from New Zealand, Australia, the United States, the United Kingdom, Canada and from today, China. “We expect this number will continue to grow, with plans underway to enable ePassport holders from more countries to have access to eGate technology in the near future.” About eGateIn New Zealand, you’ll find eGates at Auckland, Wellington, Christchurch, and Queenstown International Airports for both arriving and departing passengers. The eGates were first introduced in New Zealand in 2009, and there are now 51 eGates at our international airports. You are eligible to use an eGate if you are 12 years of age or older, and have an ePassport from:

The eGates use biometrics to match the picture of your face in your ePassport (stored in the chip in your passport) with the image it takes of you at the gate.

More in this category: « Emirates partners with Thales for next generation broadband connectivity Air Asia excited about the fintech revolution »
back to top
Mar 29, 2018