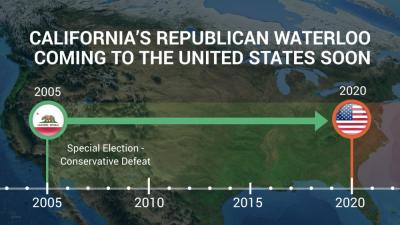 The Remarkably Prescient 15 Year Rule Means Trump & the National Republicans are on the Verge of a Spectacular Collapse write  Peter Leyden and Ruy Teixeira for Medium.  For Californians, watching what’s happening politically with Trump and the Republican Congress in America can bring a serious bout of déjà vu. It’s like watching a movie from 15 years ago, in a theater, before Netflix started streaming through the Internet and onto your TV.

Spoiler alert: Trump will bring the old conservative agenda to its absurd conclusion with high-profile climate denial, anti-immigrant intolerance, and tax cuts for the rich in the face of historic inequality, to name just a few. The Republican Congress will embrace Trump, futilely try to apply their rigid orthodoxies to the complex modern world, break into ideological war with each other, prove totally incompetent, and fail big. In the process they will alienate all the growing political constituencies that matter going forward. The Republican brand will become toxic, their support will collapse and they will be pushed to the political sidelines for a long time to come.

Why? Because California is the future and that’s exactly what happened to California’s Republican Party about 15 years ago.

What do we mean by California is the future when applied to politics? Modern California politics has an uncanny knack of prefiguring what happens in the rest of America in about a 15-year timeline. In other words, what happened in California 15 years ago should be studied closely to see how it will play out in America today. And what’s happening now in California will roll out over America in the next 15 years.

California experiences the future earlier than other parts of the country. Californians invent many new technologies, adopt them early and adapt new systems around them relatively quickly. They absorb waves of immigrants at the highest numbers in the country and accommodate them into their society quicker. The state is a magnet for young people, entrepreneurs, and people who want to change the world. Much of the population is unusually open to trying new things in the economy, society, and in politics.

Plus California has an outsized influence over the rest of the United States. It has the largest population of any state, with 40 million people, and its economy compared to all nations would be the sixth largest in the world. It’s the home of Hollywood and the digital media giants and has a huge impact on promoting next generation ideas.

Whatever the reasons, a strong case can be made from the observed facts on the ground that California blazes a political trail about 15 years before America follows.

The clearest example of this trailblazing is the modern conservative ascendance, starring Ronald Reagan himself. Reagan ushered in the conservative era of California politics when he was elected governor in 1966. He beat a two-term incumbent liberal Democrat, Pat Brown (father of Jerry Brown) and muscled out the more conventional progressive Republicans (yes, they existed) of that time.

Reagan then did largely the same thing at the national level roughly 15 years later. He bested the more conventional Republican candidates and beat

the incumbent liberal Democrat Jimmy Carter. Looking back on that time, we can characterize Reagan’s brand of politics as a “conventional conservative” era, though it seemed radical back then. In this iteration of conservatism, the practitioners worked in a conventional political way to pursue their goals by working towards bipartisan consensus, making compromises, and trying to get practical legislation passed.

Just about the time Reagan took the national stage, another more radical brand of conservatism hit back in California in 1978, with the Proposition 13 initiative that slashed property taxes and forced two-thirds votes in the legislature to pass any tax increase in the future. This movement was driven by conservative insurgents like Howard Jarvis who believed in confronting the system, changing the rules (which were seen as benefiting Democrats), and forcing other conservatives to be more aggressive. The one issue that animated their politics above all else was to slash taxes and refuse to even consider any new ones.

The Gingrich revolution served the same purpose on the national stage, 16 years later. Newt Gingrich championed this uncompromising style in the 1994 election that flipped control of the House of Representatives to the Republicans for the first time in almost 50 years. The anti-tax mindset now gripped the country as a whole.

More in this category: « World’s oldest nuclear reactor to restart Former Russian spy Sergei Skripal and his daughter probably came into contact with nerve agent at front door of home - UK police »
back to top
Sep 04, 2018