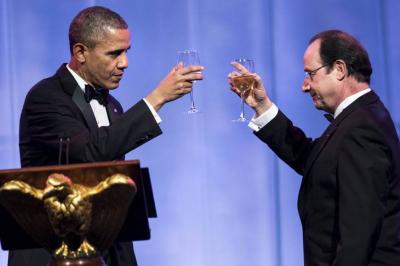 Eighteen months Later He Disappeared and So Did His Party.

The staging at the end of 2015 of the Paris Climate Accords was the high point of Francois Hollande’s presidency and on it pivoted his quest for his second five year term. Yet 18 months later M. Hollande was out of a job, as was his prime minister, and their Socialist Party had ceased to exist as a political force.

The lesson is this.

No matter how high-minded, and however much they are designed to ensure the adhesion of women and younger voters such ideologically-charged theatrical set-pieces cannot succeed unless practical expectations are successfully managed at the daily life end.

Basking in the climate agreement, and from those others who took part, notably President Obama, M. Hollande now began to react slowly, if at all, to a range of problems that pre-occupied his citizenry at large.

Among these was the extremist islamic one, known in France as Salafism and linked to this was the simmering threat of everyday life in the banlieue, the immense and even hideous apartment suburb environments that rim the major cities, and which tourists only see if they want to.

In an air pollution sense, in contrast, France remains well positioned because of its immense investment in clean energy, the nuclear version.

France has run down its nuclear technology capability in favour of importing gas from Russia.

This default position has itself become clouded as France’s once unassailable level of nuclear technology is now being successfully challenged everywhere by China.

He sought to stiffen his boss’ resolve in order that M. Hollande was seen to be confronting domestic islamic extremism.

M.Hollande, meanwhile, was doing what he always did which was to take readings, and assess situations, threats.

He referred to himself as President Normal.

His passion for step-by-step committee policy formulation meant that he was also referred to as Le Roi de Synthese or the King of Concensus.

As last year’s French presidential election drew near the soundings came in, sondages as they are known, and the polls kept telling M. Valls that M.Hollande had no chance of winning, and that the Socialist Party was heading for extinction with him.

It was now that M. Hollande reluctantly stepped down in favour of M. Valls, a lean tough-talking political operator of Spanish birth who is currently contemplating running for mayor of Barcelona.

Few doubt now that Francois Hollande’s head was turned by the international acclaim he received at the time of the Paris Accords.

France insists on viewing itself as a world power and to a quite surprising degree the success of its presidents is gauged by the electorate on the degree to which they have harvested world acclaim, strode the international stage.

President Hollande inched his way to his great office via the traditional path of tertiary education and then smoothing the path for his own political superiors.

Nobody doubted his sincerity.

His priorities though were in constant contention after the Paris climate summit.

| From the This email address is being protected from spambots. You need JavaScript enabled to view it.||  Friday 04 May 2018   |||