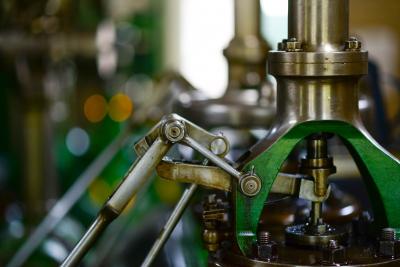 In 2015, China announced its manufacturing strategy plan: Made in China 2025. Directly inspired by the German concept of Industry 4.0, the initiative is a roadmap for China to transform itself into a manufacturing powerhouse by focusing on productivity.

One major change in the manufacturing industry over the last few decades is the volume of data collected and communicated by sensors. Based on readings from sensors, industrial equipment can be monitored, maintained and adjusted. However, to achieve this, data must be converted into meaningful information.

Manufacturers can use cloud computing, the delivery of computing services over the internet, to analyze data. This method has become increasingly popular with western manufacturers since its introduction, as it allows manufacturers to collate data on parameters such as temperature, process speed or pressure, and analyze it remotely in near real-time.

Processing powerDespite its benefits, cloud computing can cause inherent latencies due to the lengthy and complex process required to receive an input, analyze it and act upon it. This delay can be dangerous in scenarios such as smart traffic lights, power production and manufacturing.

Equally, the volume of data produced by manufacturers is increasing at an annual rate of 40 per cent. It is possible that if the growth of the Industrial Internet of Things continues at its current rate, cloud computing systems could become overwhelmed, leaving manufacturers with too much data and no way to analyze it.

One of the proposed solutions to this challenge is edge computing. In edge computing, the industrial infrastructure closest to the data source is referred to as the edge, which steps away from the central cloud system. Edge computing offers a way to improve the communication of data from Industrial Internet of Things (IIoT) devices to the central system, by moving it closer to the sensors.

In edge computing, instead of data being transmitted and processed by one network-wide server — the cloud, it is processed via multiple servers, spread across the network, known as fogs. This distribution reduces the burden on each server, latency and the need for servers to hold vast amounts of data.

Edge computing allows devices a high level of autonomy and has inherently less points of failure than alternatives such as cloud computing, while allowing for fast, powerful analysis. Because edge computing offers these benefits while overcoming the processing power dilemma, it could provide a solution for the vast country that is China.

The convergence of IT and OTChina is the world’s fastest growing robotics market. The nation boasts 49 robots per 10,000 workers in industry according to the International Federation of Robotics. To further the matter, China has committed $150bn to strengthen its manufacturing sector further.

One of the main focuses of the Made in China 2025 strategy is bringing together information technology (IT) and operational technology (OT). As Yu Haibin, chairman of the Edge Computing Consortium (ECC) elaborates, “this requires much of IT and OT convergence. Edge computing is key to supporting and enabling this convergence. Meanwhile, industrial development is also facing a turning point.

China’s future outlookThe highly centralized system of cloud computing isn’t suitable for analysis on the huge scale required by China’s manufacturers. Firstly, any cloud system would need a huge capacity to cope with the large amount of data fed into it each day. The introduction of latency could also cause problems in coordinated systems where milliseconds matter. Finally, a single point of failure could potentially paralyze or collapse the entire system, resulting in expensive downtime.

The shortcomings of cloud computing is partly why China established the ECC in 2016. The ECC aims to facilitate collaboration between IT and OT and stimulate the sustainable development of edge computing. With China’s continued government investment in edge computing, it is advancing in the field much faster than manufacturers in the west.

Made in China 2025 is well underway and with the formation of the ECC, it’s clear edge computing will take a critical role in its development. Through the increase in government funding, China is paving its own path towards Made in China 2025, rather than following in the footsteps of similar initiatives such as Industry 4.0.

More in this category: « Recycled Plastics Use to Grow with Opening of NZ’s Largest Bottled Water Production Line At the IMTS18 with Matthew Weake »
back to top
Oct 22, 2018