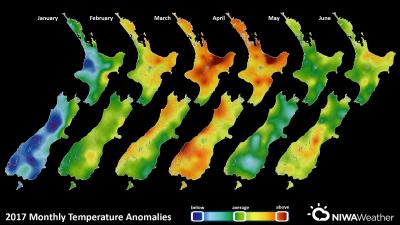 Now the first six months of the year are done and dusted, NIWA forecasters have been analysing the country’s weather statistics to see where we stand compared to last year’s record breaker.

If you’ve been feeling a little cooler, it’s because temperatures are notably down on average. The first six months of last year set up 2016 to become the hottest year on record, with an average temperature of 15.2°C. For January to June this year that figure has dropped to 13.8°C. NIWA forecaster Ben Noll says while the first six months of 2017 were 0.02 degrees above the long-term (1981-2010) average, that was nothing compared to the same period last year were a whopping 1.43 degrees above average.

In spite of the cool-down, January-June 2017 still ranks as the 39th-warmest January-June period in the last 109 years, according to NIWA’s Seven Station Temperature Series. Mr Noll says the direction from which the air is coming plays an important role in temperatures across New Zealand. Sub-tropical northerlies tend to draw down warm, humid air while southerlies via the Southern Ocean can pack a chilly punch.

Continue to read full article on NIWA site with images