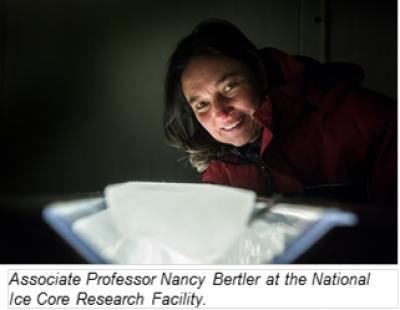 Climate scientists will be able to more accurately study Earth’s temperature changes, thanks to a global database compiled with the help of a Victoria University of Wellington and GNS Science researcher.

The database has been released today in the Nature Scientific Data journal by a large international team of scientists, including Associate Professor Nancy Bertler. Associate Professor Bertler says the database—which expands on a version released in 2013—provides a rigorously assessed compilation of temperature reconstructions for the past 2,000 years. “The database gathers information on past temperature based on evidence from a number of sources including tree rings, corals, glacier ice, and marine and lake sediments. “It’s the most comprehensive collection of information on global temperature change ever, and has taken over three years to pull together.” This database is important because it provides much-needed information on regional temperature patterns and trends, says Associate Professor Bertler. “It enables us to critically assess and improve earth system models used to provide future projections. The Intergovernmental Panel on Climate Change’s analysis of future change will include investigating the past 2,000 years, before looking into the future. How well they capture those past trends provides a tool to assess how realistic a model is, and helps to identify where improvements are necessary. This is the only tool to independently test and verify climate models beyond the past forty years.” The database gathers close to 700 records from 648 locations, compiled by 98 regional experts from 22 countries. It was coordinated by the Past Global Changes (PAGES) network of international paleoclimate scientists. Data for the Antarctic region was contributed by Associate Professor Bertler. “We contributed three ice core records from the Ross Sea region, a particularly climate-sensitive area of the Antarctic. We collected those ice cores over the past decade,” says Associate Professor Bertler. “Our reconstructions provided a detailed view of the region during the past 100 to 1,000 years, including ocean and air temperature, sea ice extent, atmospheric circulation pattern and ocean productivity. A particular focus of our work is to understand when and how quickly West Antarctica could collapse, leading to rapid increase in global sea level.” Associate Professor Bertler is an ice core scientist jointly appointed by Victoria’s Antarctic Research Centre and GNS Science. She manages the National Ice Core Research Facility at GNS Science—one of the most advanced facilities of its kind in the world—and leads Antarctic field deployments for ice core research. PAGES has released the database as an open resource, allowing anyone to download and use the data.

More in this category: « Six months in a (slightly) cooler climate Plastic bag ban plan gets a boost »
back to top
Mar 13, 2018