A water quality probe too dangerous to fund?

Recreational users, farmers and councils would all be able to use the RiverWatch water monitoring system. Photo: Lynn Grieveson

The creator of an inexpensive floating water monitor suspects the Government is unwilling to fund a device that would show how bad our water is Lynn Grieveson reports.  Lynn  writes on environment and education, is sub-editor at Newsroom Pro and a contributing photographer to Newsroom.

Regional councils are eyeing up an experimental floating water monitor that would enable them to "stake out" rivers and pinpoint polluters - but only if the developers can raise enough through donations for beta testing and commercial release.

Muir said he suspected the Government was not keen on having the true state of New Zealand's rivers, lakes and harbours revealed because it knows there is a huge spend needed on infrastructure as well as potential limits on agricultural intensification.

"They know what's happening and all we can think is that up to now there hasn't been a willingness by government to get this data out there. I can tell you right now the data is bad, and is probably the worst in our cities, it really is," Muir said.

"I used to think it was mainly the farmers, but it's not. Some of the worst pollution is happening right under our noses … there are major problems in Manukau Harbour with heavy metals, E. coli, sewerage - and Porirua harbour is a cesspool, an absolute cesspool," he said.

"I think that is one of the reasons why we haven't received government input because government is thinking, firstly, 'It's going to cost us too much because we know the infrastructure in our cities isn't up to standard' – and, 'Gosh, what are we going to do if dairy production goes down?'"

"So the Government is looking at it that they are going to get hit at both ends." 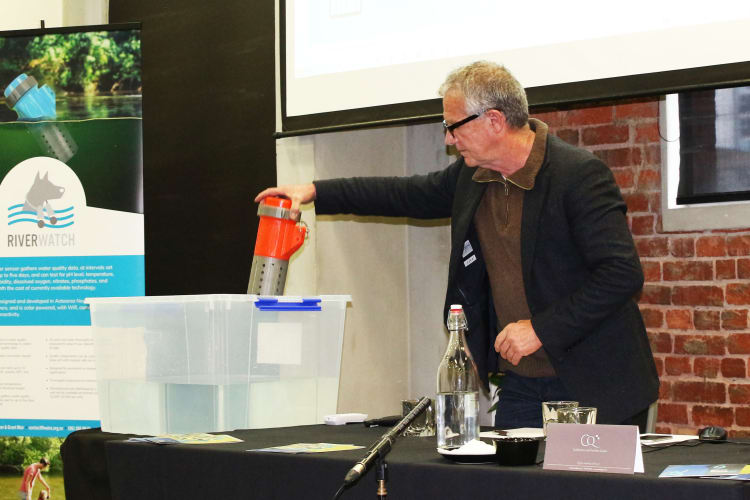 Muir said they were now collaborating with ESR on E. coli testing capability, and he was still hopeful of funding through MBIE, but, for now, "this has all been funding through volunteers and people who care about water, basically".

The developers hope to raise $50,000 through the PledgeMe campaign to pay for 10 devices to be tested at locations across the country.

"If we can build this with a group of third year students at Victoria University imagine what we can make if they give us a couple of decent electronics and software people and a bit of funding," Muir said.

"We are going to continue to run our own boat at the moment until someone comes along and says 'look, we'll give you a hand'".

The answer councils are looking for?

Each floating monitor would cost around $2500. It doesn’t yet include probes for nitrates as those currently available are too expensive and unsuited to New Zealand rivers, Muir said. He said he expected some good nitrate probes to come out of China in the next 18 months (which might add around $1000 to the cost of each monitor) but in the meantime the data provided by the probe provided a useful picture of a waterway's health.

"Between those five parameters we can tell a lot about what is actually going on in the water. Particularly if you are looking at high concentrations of nitrate or phosphates one of the first things to disappear when you have those concentrates is dissolved oxygen. Also conductivity changes and so does PH. By running algorithms across those five parameters we can actually determine a lot of other things that are going on in the water," he said. The invention has caught the interest of regional councils, which are adding up the likely cost of increased responsibilities over water quality. Some councils have already bought imported monitors for $25,000 each but Muir said they had proved unreliable in New Zealand rivers.

So now we've got regional councils saying: 'we want to stake out our river system'

"The regional councils know that they are going to be mandated with the job of testing for water quality no matter what government gets in [after the election]," Muir said.

"When you look at the economics of sending staff out with just a tester wand, a meter, you plug it in the water and get a one-off reading, that's really expensive. So, when we came in with this idea all of a sudden everyone was saying 'Hallelujah, this is the answer we'd been looking for' - something that can be deployed and stay in the water for a long period of time, it doesn't have to have someone going out to get the data from it, that data can be sent automatically to the website or they can retrieve it very easily.

"So now we've got regional councils saying: 'We want to stake out our river system'," (by putting water quality monitors at the source of the river and then at points downstream).

In urban areas they would be able to use the system to pinpoint 'single point emitters" such as factories or individuals discharging pollutants into waterways, and use the data to take them to court.

Muir said farmers were interested in the device as well, as it would enable them to measure whether mitigation measures such as riparian planting were having an effect, as well as helping them prove they were not causing pollution.

"A lot of the farmers say, 'The thing that gets my goat is, hang on, I just spent $50,000 on my farm, I fenced it, riparian planted it but old Joe upstream hasn't spent a cent and all that dirty water is flowing through my place and if the regional council tested down here they are going to blame me'," he said.

Muir said farmers would also benefit from regional councils using it as a lower-cost solution.

Recreational users and tourists would also benefit, with real-time water quality information publicly available on the RiverWatch website, and searchable by waterway.

"We are happy to share our toys with anyone to get our data out there. I just wish few other parties would share toys with us as well," Muir said.

| A Newsroom release by Lynn Grieveson.  Lynn  writes on environment and education, is sub-editor at Newsroom Pro and a contributing photographer to Newsroom.  ||  August 15,  2017   |||

More in this category: « Most Kiwis do not want to follow President Trump’s lead New technologies helping clean up NZ’s waterways »
back to top
Mar 13, 2018