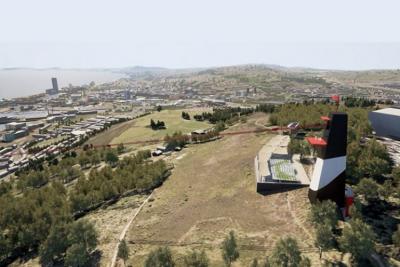 Nov 30, 2017  -  A major tourist attraction that will include a cable car, toboggan rides, zip wire, as well as a restaurant and event venue on Kilvey Hill in Swansea has taken a step forward.  Board directors of New Zealand-based Skyline Enterprises have given the green light for the company to start the detailed design process and begin legal discussions for the attraction the will overlook Swansea Bay.

Representatives from Skyline Enterprises will now work with Swansea Council to move the deal forward and get it approved.

Once an agreement is in place, Skyline Enterprises will start working towards its planning application.

Should the scheme go ahead it will be funded entirely by private money, with no funding required from taxpayers.

"Thanks to a 'Team Swansea' approach and the backing of a number of local businesses who have been supportive of the Skyline proposal, we were able to convey to Skyline Enterprises our enthusiastic support for the scheme during their recent visit.

"This decision is a great vote of confidence in Swansea as a tourist destination and builds on the great work being done through the City Deal and our bid to be the UK's City of Culture in 2021."

The cable car attraction set for Swansea would be the company's first outside New Zealand.

Representatives of the company have been to Swansea twice in recent months to check out the potential of Kilvey Hill as a tourism hotspot capable of attracting tens of thousands of visitors a year.

The latest visit included meetings with Swansea Council and major local businesses at the Liberty Stadium to advance Swansea's case for the attraction, which would further build on plans to regenerate the River Tawe corridor.

“It's been an underused resource, and has huge potential to be transformed into a fun visitor destination for local people and hundreds of thousands of visitors a year.

"We were determined to do all we could to help bring this project to Swansea because it would also attract additional investment and benefit local businesses by generating more spending and supply chain opportunities."

Geoff McDonald, Skyline Enterprises chief executive, said: "Skyline Enterprises is very excited about the potential opportunity to partner with the Swansea community to create what we believe will be a significant and vibrant attraction for the area.

“We are encouraged by the enthusiasm and interest in our gondola and luge operation, and look forward to on-going discussions."

The cable car attraction would add to the work Swansea Council and Swansea University are continuing to do to breathe new life into the historic Hafod Morfa Copperworks site.

More in this category: « Maintenance Engineers Network Evening in Hawkes Bay Engineering New Zealand reaction to outcome of Police CTV building investigation »
back to top
May 23, 2018