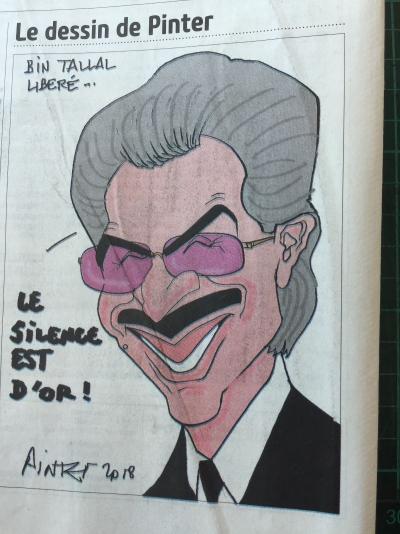 Why exactly had Saudi Arabia’s signature commercial figure internationally been forcibly detained for a quarter of a year in his own country and by his own close relatives, the ones in the ruling monarchical line?

Only one thing is certain.

The riddle will never be disclosed either by prince Al Waleed or by his captors.

Silence, as our illustration indicates, is the gold in this transaction.

The given reason, the throne-based drive to eliminate corruption, seems itself questionable.

There is no sign that he was in the business of allocating public works and thus collecting undisclosed commissions on them.

Prince Al Waleed though was always vulnerable in the matter of taking money out of Saudi Arabia.

This especially applies to the royal family crude allocations in which members of the Saud family get paid in oil shipments.

As the Saud family continues its rapid exponential and compounding growth so an increasing amount of the desert kingdom’s oil output is diverted and devoted to these oil shipment divvy-ups the proceeds of which are rarely repatriated.

The Saudi foreign currency reserves are being depleted.

The estimate often stated of $500-$600 billion of a few years ago, thought to be on the high side even then, is considered to be evaporating by 20 percent or more each year.

Away from its alabaster palaces and starch-clad princes Saudi Arabia gives visitors the impression to visitors of looking poor if not actually poverty-stricken in a way that its neighbours notably the Emirates do not.

This leads us to the other cause of the prince’s imprisonment, religion.

The Saudi monarchical line has kept itself on the throne by placating Wahhabism, the extreme version of the Sunni sect.

The prince makes a point of demonstrating his piousness by, for example, on his skiing jaunts, digging his face in the hour of prayer into the snow

Even so, the prince’s demonstrable and highly publicised worldliness, especially in terms of empowering females, remains a direct challenge to the Saudi-Wahhabi theocracy.

This has been hard for the secular west to comprehend.

For example only now in Europe are the Saudi-Wahhabi mosques being brought under government supervision, especially in terms of the financing of them ---from what entity and for how much?.

Commented a Middle East source: “You look at prince Waleed successful investor, a man of honourable character, self-confident, this self- made man of humanitarian traits…….

"A man with thousands of friends will have thousands of enemies, who in their jealousy and envy will all want one thing which is to see him cut down.”

| From the  This email address is being protected from spambots. You need JavaScript enabled to view it. ||  Wednesday 14 February 2018   |||

NZ a bus stop on China’s ‘Belt and Road’

Is Kim Jong-un making a surprise visit to Beijing?