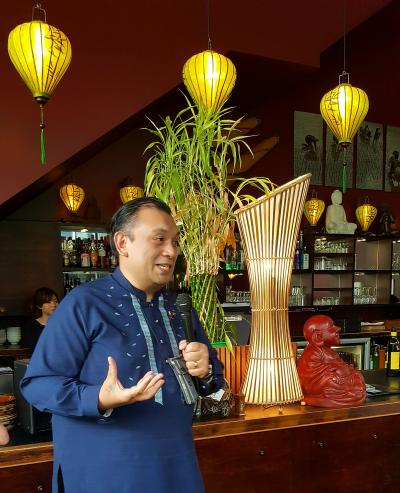 Philippines Ambassador Jesus Domingo talking to the National Press Club in Wellington drew a direct parallel between his country and New Zealand, pointing out that they were both “Cinderella” nations in that they were constantly overshadowed by their more powerful neighbours.

In New Zealand’s case this was Australia. In the Philippines instance it was the industrial powerhouses of north Asia, notably China.

Mr Domingo (pictured, above) was speaking on the topic of “New Zealand’s Asia Opportunity Hiding in Full Sight---The Philippines.”

He observed that this state of being overshadowed by its northern Asian neighbours meant that his country’s contribution to the regional and global professional services sector, notably in healthcare, was simply often ignored.

In New Zealand the Philippines supplying specialist manpower to the dairy sector was routinely overlooked.

Yet, he noted, as far as New Zealand was concerned there were ever-present signs of the volume of Philippine and scale of agribusiness involvement.

The sudden restoration of Catholic churches in New Zealand’s South Island was but one example.

He said that he had drawn the conclusion that Philippine nationals found themselves most easily and most productively assimilated into the Westminster zone.

Mr Domingo, who also represents his country throughout Oceania, noted the Philippines transition in historical terms in relatively recent times from a Spanish colony to moving under the United States aegis, and then more recently still to independence under the Washington governmental system.

This had made the Philippines far more multicultural, and diverse than was widely perceived, he said.

For example it was not generally understood that the Philippines lay on the northern fringe of the Polynesian migration and settlement.

The sharing of a number of Polynesian-Maori words was testament to all this he noted.

Mr Domingo touched upon but did not specify the trade and investment links which include for example Philippine ownership of New Zealand food processors Griffins, and also Goodman Fielder.

In the event New Zealand also enjoys a favourable trade balance with Philippines exporting four times the value of imports.

Mr Domingo conceded that in the face of the north Asian manufacturing “juggernauts” that the Philippines had become specialists in sectors that he described as being “unsuitable” for wealth generation, and thus domestic job creation.

He stressed though that it was in the export of its people that it had become the contemporary version of an empire on which the “sun never set” just because Philippine nationals were everywhere; 50,000 in New Zealand.

Noting that a common language, English, and a common religion, Christianity, were powerful elements in enabling Philippine nationals to become productive members of Commonwealth economies, he also stressed his peoples' specialisation in caring in roles such as “nannies, and nurses,” as he described them.

Mr Domingo, noting the presence at this same National Press Club event of Singapore High Commissioner Bernard Baker, singled out the island state as a particularly outstanding example of a Commonwealth member in which flourished Philippine nationals in this caring, nurturing sector,

Mr Domingo defined also a willing quality in the Philippine workforce which he described as being one of “meekness” which enabled them to take up such a large part of the arduous New Zealand milking shed capability.

Mr Domingo served as Philippine Consul in Saudi Arabia, and was a member of the Philippine delegations to the United Nations in Geneva and also New York.

| From the This email address is being protected from spambots. You need JavaScript enabled to view it. || Wednesday February 28, 2018   |||