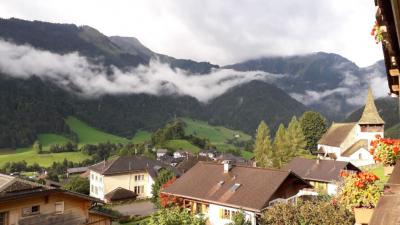 In Vaud, French is spoken, and in the other two cantons, German. The cantonal frontiers, shown on maps, are of course physically invisible but nevertheless very real, and this is often not understood by casual visitors..

Try and buy a loaf of bread in French more than a couple of kilometres into Bern or Fribourg and you will be met with a blank smile - try the same by asking for a cup of coffee in German in Vaud and you may be answered in English, or even Portuguese, Serbo-Croat, or some other exotic language.

There are four official languages - but in very parochial Switzerland cantonal and regional boundaries still mean a great deal.

Think Belgium and the Walloons and the Flemish.

Switzerland is a land of railways and there are more than 20 small companies providing local services in addition to the state system, the SBB. So, from Montreux on Lake Geneva to Zweisimmen in the Bernese Oberland, still part of the Pays D'Enhaut, you can take the MOB railway which winds its beautiful run up to its terminus there where you can then go on by another railway enterprise to Bern.

The views, as they are if you drive up from Villars via Diablerets, are of tall, grey mountains with high alpages where cattle can be seen and heard even from far away. Brave bicyclists battle up and down the very steep roads in this area but, as we have observed before, they are a fearsome hazard as, panting away breathlessly as they struggle upwards or freewheel down, they are hard to overtake.

This is very much cattle country, and the milk and cheeses are world famous. In particular, Gruyère, named after a village with a fine chateau, and L'Etivaz, named after a village with centuries old wooden houses and barns, some dating from the 16th and 17th centuries and still in fine shape as built from a wonderfully resistant local timbers of the larch or spruce families.

Roofs are covered in wooden shingles, as are some walls, and big efforts are being made locally to revive and preserve the disappearing art of shingle cutting and roofing. It is expensive, inevitably, but compares favourably in terms of cost and durability with combed wheat reed or other thatching materials in the UK when priced by the square metre in Switzerland or the so-called thatchers' "square" in the UK.

This style of building in wood can be seen all over the Pay d'Enhaut and several villages like Rougemont, Rossinière (pictured, above) and Chateau d'Oex are well worth visiting for their wooden architecture alone.

The churches, many with shingled spires, are very special since they are mostly Romanesque Catholic churches, simplified into Protestant "temples" after the Bernese invasions of these lands in the mid 16th century. Some, as in the church in Zweisimmen, have mediaeval frescoes, covered by the Protestants in whitewash, and only quite recently uncovered with their brilliant colours only slightly dimmed by time and this artistic vandalism.

This particular church hosted a Beethoven piano and violin sonata recital, part of the annual Gstaad Menuhin Festival, last Thursday evening which your correspondent and the photographer greatly enjoyed as the playing standard was very high indeed.

This festival does nothing by halves and very big musical names of international repute seem flattered to be asked to perform. Big money in Gstaad, big names at the festival. So big indeed is the Gstaad money that the little local airfield at Saanen has built three enormous heated hangars to house the executive jets that cruise in and out in the Gstaad ski, tennis, polo, and festival seasons.

Cattle play a large part in the lives of the local people.

Recently, a work of considerable research and scholarship has been published about, of all things, cow bells (pictured below) and their decorated collars. Very simply, cow bells not only tell the farmer where his beasts are up in the mountains in summer, but the bells also ward off evil spirits, encourage benevolent protectors, keep the cattle well, frighten off thieves and other possible predators, and are generally a good thing.

Early examples of the embroidered collars are mostly covered in Christian and some pagan symbols related to fire, water, and so on and the bells themselves, mostly cast in earlier times in bronze, repeat in relief some of these signs.

The golden age for bells cast in bronze was from the mid 19th to the mid 20th centuries but much earlier and very fine examples are to be found in museums such as that in Saanen along the MOB railway towards Zweisimmen.

So deeply embedded in the local rural psyche are the sounds of these bells that Swiss mercenaries, an early and important local export, were forbidden to take bells away from the Pays d'Enhaut or other parts of the country, in their kits for fear the sounds would make the soldiers homesick and cause them to desert their foreign employers' service.

Modern parallels could only with difficulty now be imagined.

Perhaps the bottled odour of fish and chips? 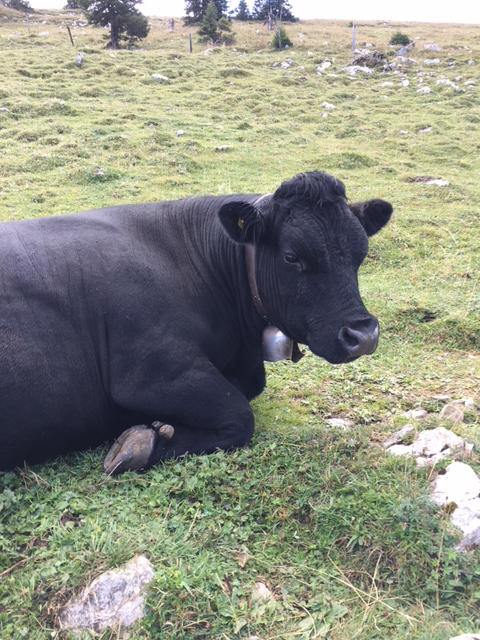