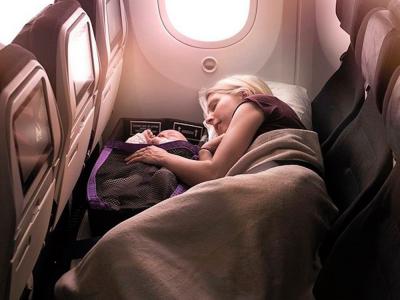 Air New Zealand recently revealed upcoming enhancements to its Skycouch, a row of three economy seats that turns into a completely flat surface.

Come mid-2018, infants flying economy Skycouch will be able to lie down next to their parents for the entire duration of a flight, thanks to a complimentary new harness, belt, and pod.  Previously, Air New Zealand required infants to be seated on a guardian's lap when the seat belt sign was on.

The Skycouch Cuddle Belt, which was previously certified to allow a maximum of two adults or a guardian and child to sleep side-by-side, has also been updated to allow two children to lie down together.

Air New Zealand is hoping to make flying a bit more comfortable for parents of infants or young children, even in economy class.

Earlier this month, the airline revealed upcoming enhancements to its innovative Skycouch, a row of three economy seats that turns into a completely flat surface. The wide surface of the Skycouch, which looks similar to a futon, allows passengers to lie down during the entire duration of a flight, both domestic and international.

First introduced in 2011, Skycouch was designed to let parents and their kids rest, relax, and play in a way they usually cannot, given the limited space of most economy cabins.

More in this category: « First ever air service to take off between New Zealand and Chicago World's first 787-10 Dreamliner delivered to Singapore Airlines »
back to top
Mar 22, 2018