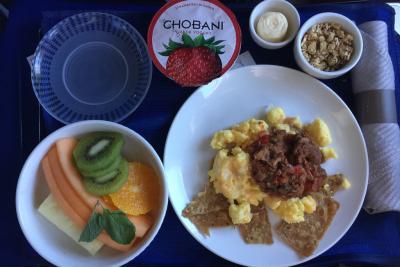 If you’re a frequent long-haul traveler, you’re probably familiar with the spectacle of an airplane breakfast. About 90 minutes from London, or Shanghai or Sydney, the lights go on, and flight attendants come through the aisles banging coffee kettles, often offering a limp omelet, chewy sausage, and a stale, but warmed, croissant.

Sometimes this happens in the morning. Often, it does not. Many airlines go with breakfast as the second meal on all overnight flights, whether they land at 7 a.m. or 4 p.m. Some even serve it on flights most passengers don’t consider redeyes. United Airlines often offers coffee and eggs on Asia-bound flights departing the United States at mid-day, arriving as late as 4 or 5 p.m. Technically, it’s one day later, but to passengers, it feels like the same day.

Passengers like it that way, Chris Birt, general manager of service delivery at Hong Kong Airlines, told me in the latest installment of my Airline Insiders series. Eating breakfast “feels right for your body,” even if it doesn’t help you acclimate to local time.

Interestingly, Hong Kong Airlines has an overnight flight that lands mid-day, and the airline tried to serve lunch. But passengers complained, and breakfast is now on the menu. “You will never get it right for 100 percent of your customers,” Birt said. “It depends on how much sleep they’ve had, and what time zone they’ve decided to stay in or change to.”

More in this category: « Grand Mediterranean ex Lisbon The lights are on at Runway Number One - Istanbul's new airport »
back to top
Jul 03, 2018