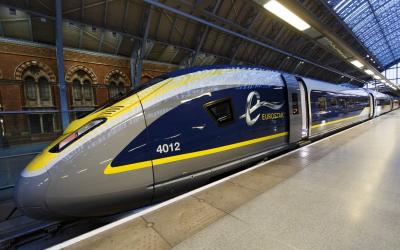 Unlike airline passengers, travellers on Eurostar face no onerous baggage restrictions; they can take two suitcases and a third smaller piece of luggage without additional charge. The security screening process is relatively gentle, with no ban on liquids above 100ml.

Eurostar believes these advantages will win market share from the airlines.

Mike Cooper, the train operator’s new chief executive, called it “a historic milestone for Eurostar and the growth of international high speed rail".

“With the Netherlands becoming increasingly popular as a business and tourism destination, the potential for our new route is significant and we look forward to offering our customers a fast, seamless connection between these key European cities,” he said.

But initially the train has significant disadvantages relative to air. Between 6am and the train's departure at 8.31am, 13 flights had left for Amsterdam from six London airports. Eurostar has just 12 departures a week: 8.31am and 5.31pm on weekdays, but morning only on Saturdays and evening only on Sundays. Arrival at Amsterdam Central is at 1.12pm and 10.12pm respectively, not ideal business timings.

More seriously, until 2019, no trains will carry passengers all the way back from Amsterdam or Rotterdam to London.

The UK and the Netherlands have yet signed a deal on “juxtaposed border controls”, allowing British officials to check passports of passengers at Amsterdam and the intermediate stop of Rotterdam. So initially the journey will be far from seamless.

All passengers will take a Thalys high-speed train to Brussels. Here, they clear security and passport control, before boarding a Eurostar service — perhaps the very train which has run from Amsterdam to Brussels without them.

Fares are higher, too — a problem when Amsterdam-London is one of the busiest and most fiercely competitive air routes in Europe. A British Airways spokesperson said: “We know our customers enjoy the choice of 17 flights from London a day, with airports to suit travellers starting their journey from all across the region.”

Meanwhile easyJet flies from four London airports to Amsterdam, offering 21 daily flights each way. “We carry 1.9m passengers a year and provide easy and affordable fares from £29.99 one way,” said a spokesperson.

But Mark Smith, the rail guru known as The Man In Seat Sixty One, told The Independent: “This is a massively important air route, and most importantly high-speed rail can get you there in under four hours. And these days, if you can go from the centre of one city to the centre of another city in under four hours, then you can start competing for both business and leisure travel on that route.”

The train was set for a clear run through northern France, where the vast majority of rail services have been cancelled due to a rolling strike by employees of the state rail enterprise, SNCF.

Ten Eurostar trains between London and Paris have been cancelled as a result of the industrial action.