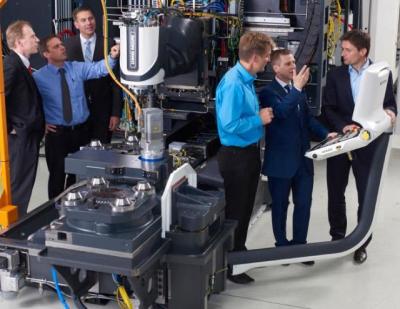 Schaeffler and DMG MORI are continuing their successful cooperation, expanding it to include the development of additive manufacturing processes for rolling bearing components. Both companies signed a cooperation agreement at the JIMTOF in Japan. In addition, the marketing partnership that began in 2016 has been extended. Schaeffler thus remains DMG MORI’s marketing partner worldwide for rolling bearings and linear technology.

DMG MORI, the world’s leading manufacturer of machine tools, and Schaeffler Technologies AG & Co. KG, system supplier for rolling bearings, linear guides and drive technology, have signed a cooperation agreement at the JIMTOF in Japan that has the objective of jointly pursuing development work in the field of additive manufacturing of rolling bearings. Additive manufacturing is a strategic focus in Schaeffler’s development roadmap.

“Both partners complement each other perfectly to drive the future of machine tools as well as the continuing development of rolling bearing technology. Our joint “Machine Tool 4.0” development project has already demonstrated this with great success. Our cooperation in additive manufacturing means another very important strategic area for the future,” said Dr. Stefan Spindler, CEO Industrial of Schaeffler AG.

Continuing premium partnership in marketingBoth companies also extended their marketing partnership, which began this year, to 2017 at the JIMTOF. As part of this cooperation, Schaeffler is DMG MORI’s marketing partner worldwide for bearings and linear guides. As early as 2016, Schaeffler participated successfully in in-house exhibitions, technology symposia and training courses held by DMG MORI. This cooperation is expected to increase even more next year. The operators of machine tools in particular will benefit from the cooperation in two ways. Firstly, it will help to demonstrate bearings, linear technology and direct drive technology as well as new ideas in sensor systems and linking components. Secondly, it will help to show how these can be used for predictive maintenance, increasing efficiency and process optimization.

Added value through digitalization: “Machine Tool 4.0” innovation projectAt the JIMTOF in Tokyo, Schaeffler and DMG MORI presented the “Machine Tool 4.0” innovation project jointly with other partners. The project links existing technology with new digitalized components from sensors to the cloud. Two prototypes were set up based on the fourth-generation DMC 80 FD duoBLOCK® universal milling and turning machining center. Additional sensors for measuring vibrations, forces, temperatures and pressure have been integrated in nearly all bearing positions relevant for the machining process in the prototypes of the innovation project in order to obtain optimum information about the machine condition.

Published in ACROSS INDUSTRY
Tagged under

More in this category: « Global launch for New Zealand manufactured boom The story behind Steinhoff has an NZ connection. »
back to top
Jul 27, 2018