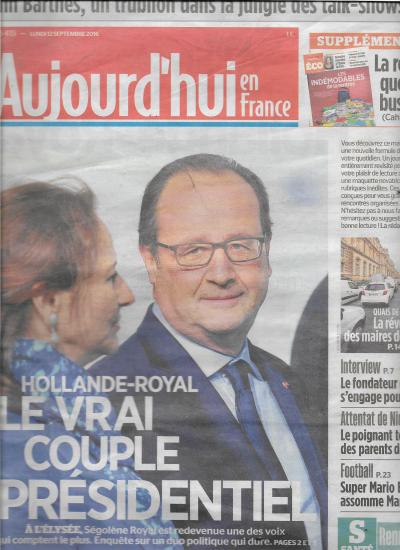 Le Parisien Determined to Identify What Voters Believe in place of what elites believe they believe.

Paris’ leading daily newspaper, the tabloid Le Parisien-Aujourd’hui en France has outlawed from its pages all poll-based predictions on the pending presidential election.

The centrist popular daily blames unquestioning reliance on polls, known in France as “soundings” to have led to the embarrassing set of circumstances in which Alain Juppe was unanimously predicted to become the successful candidate of the right-of-centre Republican Party.

In the event, and as MSC Newswire’s European correspondent had predicted, (see our story below) the successful candidate was Francois Fillon who now becomes the favourite to win the pending presidential (i.e. general) election.

In the same forecast, MSC Newswire had also predicted that current president Francois Hollande would not be the Socialist Party candidate in the election. In the event, and several days after our prediction, Mr Hollande stood down.

Meanwhile, according to Le Parisien, the elimination of polls, soundings, and other tendentious content will be replaced by plain and simple reporting.

The objective being to report what people are in fact thinking in place of the former practice of reporting on what a narrow elite believe, or want to believe, everyday people are thinking.

According to our European correspondent, Alain Juppe’s “Happy Identity” slogan was only finding approval among the media.

Similarly Mr Juppe’s involvement with a funds scandal, which had caused him to live in Canada, was taken seriously by voters, if not the media.

Also, the idea of a Clintonesque co-presidency (see front page), while attractive to the media, nonetheless dismayed the public at large, as it did voters in the United States presidential election.

The End of the Politically Correct

Our foreign correspondent forecast the Trump victory, and now previews the fall of France’s Francois Hollande ....

| Napier, MSCNewsWire, Nov 24, 2016 | - The predicted fall of France’s president Francois Hollande in next year’s election will bring to a close the initial era of political correctness. He is scheduled to become the third big-economy leader victim within less than a year of the accelerating electoral power of the non-political class.

Mr Hollande is known as the King of Consensus. His determination prior to any decision to canvass every opinion and nuance in his own Socialist Party and also in the string of other French leftward parties conveyed an impression of dithering in the face of islamic insurgency.

Instead of being seen to be heading a tough reaction Mr Hollande’s nature lead him to be more at home leading candle lit marches, vigils and uttering trite panaceas in the face of the emergency. It was left to his prime minister Manuel Valls to express the public mood about the threat throughout France of rampant religious extremism.

Worse still, Mr Hollande was viewed as being over-preoccupied by the star studded Paris climate conference with its breathtaking ritual insights into the blindingly obvious instead of with the much more visible and immediate terrorist threat

The most visible manifestation of Mr Hollande’s pending loss of the presidency is the number of his own hand-picked cabinet members who are deserting the sinking ship. The “frondeurs” as the rebels are known are setting themselves up, they are still in their 30s and 40s, for the 2022 election.

There is though in the anticipated disappearance of Mr Hollande a signal point of difference with those other landmark scupperings of the political classes, Brexit and Trump. The difference is that this time everyone is expecting it.

The winner of the French Republican Party primaries is now looked to as the winner of the presidency. This is looking, in fact, increasingly like former premier Francois Fillon.Mr Hollande’s political career has been an inch-by-inch bureaucratic progression characterised by a reverse Clinton-effect process.

His life-mate Segolene Royale (pictured above with Hollande) with whom he has four children was the glamorous one. Her attempt to crack the French version of the glass ceiling was more spectacular than anything attempted by Hillary.

In the event she lost to Sarkozy.

It was now that that the blander Francois entered the lists and in doing so streamlined his approach by parting from Segolene.  The go-it-alone Francois now beat the unpopular Nicolas Sarkozy and the ElyseesPalace was his and his Socialist Party’s.

Four and a half years later he looks like a president who knows he can’t win. He is unlikely to hand over to the rather more decisive figure of his prime minister Manuel Valls.

No major economy leader, not even President Obama, personifies so closely as does Francois Hollande the twin pillars of diversity and multiculturalism which in France’s case are supercharged by the Revolutionary code of the Rights of Man.

Few doubt his sincerity of purpose. It is just that as with the other casualties of this new wave politics, the Clintons, he found himself reading from an out-of-date script.

More in this category: « End of the Golden Weather for New Zealand Western Powers Diplomacy as Middle East States System Breaks Up Like father-in-law, like son-in-law: Jared Kushner named senior adviser to Donald Trump after making deals with China-linked company »
back to top
Oct 11, 2018