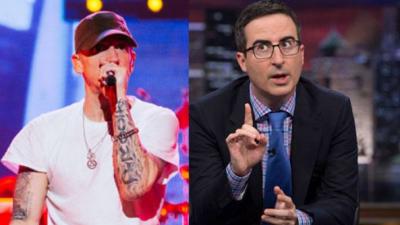 Now the fun begins on US late night talk shows.

For the National Party, trouble does not travel alone.

The Eminem verdict against the National Party gives United States late-night talk show hosts still another opportunity to immerse themselves in the New Zealand broadcasting argot in which for example there is the fush und chups cuisine the Puntucth camera along with the rapper himself described here as Im’n’im.

The use of the track in the 2014 campaign was though no joke for the copyright holders of the riff who lawyered up the moment they heard the National Party election version of it.

The fine against the National Party cited as $600,000 may of course be subject to an appeal.

There is also the degree to which the National Party can lay off the fine against the political marketing consultants instrumental in the selection of the track.

It is not known for example if the National Party had imposed fee retentions against the outcome of the copyright case.

This involvement of third parties in the case is a delicate one.

It is not known if the National Party or its consultants carry insurance against this kind of contingency.

Unlike standard text or prose anything in the musical sphere is subject to the most rigorous copyright enforcement and this is one reason why in any outtake from anything musical the copyright holders must be cited.

Given the complexity of musical copyright, and the extremely unlikely possibility of it being contravened by a political party, there are strong grounds for believing that the National Party remains substantially exposed to this judicial action.

In the meantime and in the knowledge of their own liability to the United States late nighters such as John Oliver, broadcasting editors might themselves become cautious about the now standard New Zealand broadcasting patois in which sentences such as this routinely emerge…..