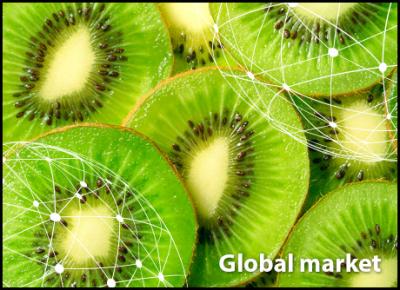 Rudolf Mulderij writes in FRESH PlAZA  that demand for Kiwifruit is on the rise worldwide, but the supply has been affected by the weather. "New Zealand harvested less this campaign after a difficult growing season, with a hot winter and a lot of rain," explained a trader. Moreover, the Chilean production is also reported to have dropped, and now Italian kiwis are hitting the market and they also expect a smaller volume due to the impact of frost in certain regions and the dry summer. "As a result, the supply will be much scarcer, while the demand continues to rise," assures a trader.

New Zealand: Zespri is looking for new marketsZespri, the export organization of New Zealand kiwis, is seeing strong growth this season. The SunGold continues to grow in markets like Japan and China. Moreover, their sights are set on other markets in South East Asia, India and North America. The European market is also developing well, with strong demand all year round. Japan is the biggest market this season, accounting for the export of 23 million trays. The second most important market is China, accounting for 22 million trays.

The start of the season in the northern hemisphere is around the corner. The Italian volume is expected to amount to around 5 million trays, which is a notable growth. The company aims for the demand to grow faster than the supply, and that seems to be successful. As a result, priorities have to be set as far as the markets are concerned. For the coming years, significant expansions are expected in the acreage, with another 1,800 hectares in Europe and 400 hectares in New Zealand. The company is working on growth for the SunGold. Eventually, the share of green and yellow kiwis must be split 50/50.

More in this category: « NZ co-operative ships first batch of tamarillo pulp to US US to allow fresh persimmon imports from New Zealand »
back to top
Jul 20, 2018