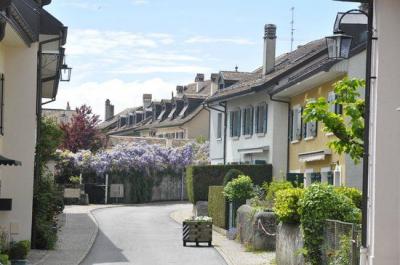 “ North of Italy, among the Alps, is Switzerland; it is a small state with no language of its own, producing little but goats and some timber; but possessing considerable wealth because of the large number of visitors who arrive every year for climbing and sightseeing.”

This paragraph, from a 1928 travel guide, can no longer be described as accurate or representative but it is probably true to say there are now fewer goats and, possibly due to much building in the last 90 years, fewer trees.

Roving travel reporter Peter Martin settled in Switzerland with his wife in 2015 for a very specific reason. Two of his daughters and their children, for work related reasons, migrated from England to villages near Lake Geneva some years ago and a third daughter moved to Chamonix in nearby Alpine France.

He takes up his settler’s saga…………

Your correspondent’s 103 year old mother, having died in 2015, meant that we had no family left in the United kingdom so my wife and I decided, after much thought, to sell up in Oxfordshire and move to be close to our children and grandchildren.

We duly sold our house in the English countryside and took a flat on rent in Buchillon,(pictured) a charming lakeside vineyard and former fishing village between Lausanne and Geneva on Lake Geneva. We have now been settled in our flat for 3 years and it is appropriate to make some assessment of the settler’s experience. 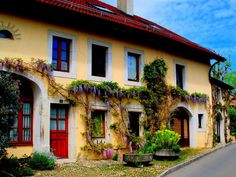 As a couple having children formally settled in Switzerland we were entitled to apply for a “Permis B” allowing us, subject to good behaviour, to be temporarily resident for 5 years with the right then to apply for a further 5 years such residence and the prospect, if we then continued to be of good conduct, to be allowed permanent residence.

Being of good conduct means, principally, not speeding, not being drunk in charge, not littering, not making a public noise, and being generally inconspicuous.

Also, of course, paying your taxes and other bills promptly. So we arranged our financial affairs in such a way as to derive a Swiss Franc income from pensions and investments, discovered the nature and extent of our tax obligations, and made arrangements with a good local accountant to meet them: we also made Swiss wills since, being no longer young, we wished to simplify our affairs in the event of our deaths.

Renting accommodation is simple, the rules straightforward, and the paperwork modest. Anyone coming to live or to live and work in Switzerland is well advised to seek guidance on the ins and outs of life here and there is no better guide than David Hampshire’s Living and Working in Switzerland which is regularly updated by its publishers to be found on www.survivalbooks.net.

To show how complicated life here can be, the book has no less than 350 pages.

The Swiss are mostly German or French speaking, mostly depending on which part of the country you inhabit. Here, in the Canton de Vaud, French is mostly spoken but just a few kilometres away to the North, not far from Lausanne, is an invisible language frontier.

If your German is poor or non-existent, even a cup of coffee is hard to obtain and pay for. It is as if, on leaving England for Wales near Monmouth, for example, you could only buy a newspaper by asking for it in Welsh. Takes a bit of getting used to.

Some other things also need acclimatisation. Local media just this week demonstrate that the cost of food and commodities in Switzerland is some 59% higher than in the rest of Europe. It is just worth consulting this detailed article to see why: www.swissinfo.ch/eng/business/high-price-island_switzerland-has-most-expensive-food-and-drinks-in-europe/

Another is the Swiss themselves. The Swiss are not like the English, the Scots, or the Irish – they are very much themselves. They are not, either, very much like the French, the Germans, or the Italians whose languages they speak – albeit in a manner all their own.

They are industrious, honest, thrifty, and, for the most part, courteous. But they are not overtly friendly or welcoming. It is as if, given that some 15% of their population is composed of non-Swiss, they want to avoid too much contact with non-Swiss, thus possibly even contaminating or diluting of their Swissness. It is hard to say but what is clear is that if you have a real, intimate friend in a Swiss you are likely to be a rarity among your non-Swiss friends.

Finally, in this very brief account, there are the railways, the post, and local banking of which the Swiss are justifiably very proud. Swiss railways serve the country wonderfully well and it is unreliably reported that no station receives a train less than once an hour: they run mostly on time but as the Swiss most favoured method of suicide is jumping in front of trains there are occasional blips. Buses too are very frequent and reliable.

As for the post, it is near miraculous as letters posted today in Switzerland really do arrive elsewhere, mountain or valley, in the country next day. A standard sized letter from England usually arrives on the third day after posting. Since almost all domestic bills are paid electronically by bank transfer, direct debit seemingly barely existing, an efficient banking sector for domestic banking is critically necessary and our experience has been universally good.