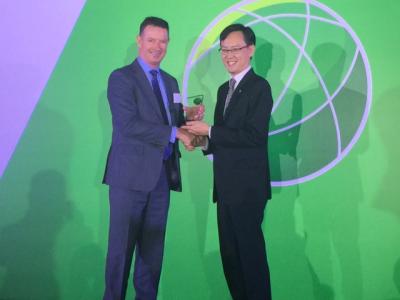 Ports of Auckland has beaten out competitors from Australia, New Zealand and the Pacific to be crowned Best Seaport in Oceania for the second year running.

The port was voted into the finals by customers and industry peers at the Asia Cargo News’ Asian Freight, Logistics and Supply Chain (AFLAS) Awards; the only New Zealand port to be selected as a finalist amongst three Australian ports (Port of Melbourne, Port of Brisbane and Sydney Ports).

“I am so proud to accept the award as the best port in our region on behalf of our team. It is a fantastic achievement for Ports of Auckland and testament to the hard-working people that keep our port running 24/7. We have a world-class group of people working here, doing their best for our customers and Aucklanders” said Ports of Auckland Chief Executive Tony Gibson.

The awards recognise leading air and shipping lines, air and sea ports, logistics providers and other industry professionals. Ports of Auckland was the first recipient of the ‘Best Seaport in Oceania’ award when the category was introduced in 2016, and the only recipient in this category to date.

More in this category: « Port of Napier in New Zealand orders six more lift trucks from Konecranes Eastland Port and its contracted handlers smash throughput records »
back to top
Jul 10, 2018