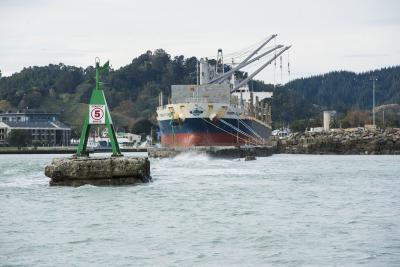 Despite a wave phenomenon that kept ships from the harbour for a week Eastland Port and log marshaling and stevedoring companies ISO and C3 shattered monthly log throughput records this June.

A total of 287,349 tonnes of wood was loaded onto 14 log vessels as they berthed one after the other at wharf 8.

Eastland Port manager Andrew Gaddum says shifting that amount of wood is testament to the reliability and professionalism of ISO and C3 staff.

“Both ISO and C3 have worked hard to increase their ship load rates, and while we still collectively have work to do in this area, the huge volume exported during the month is testament to their hard work and focus.

“The fact that there were no significant safety issues identified or reported during that extremely busy month is also exceedingly pleasing.”

“When ships are alongside a port, it’s costing the exporters money, so these guys are the ones that through their skilfulness and shear hard work, can get the ship turned around and off to market as quickly as possible”

Mr Gaddum says June’s throughput figures are the highest the port has achieved since Eastland Port, part of Eastland Group, was formed 14 years ago.

“We saw an 83 percent occupancy of wharf 8. With 14 ships docking during the month, and each one taking one to three days to load, we are getting closer to maximum capacity.”

The figures are all the more impressive because between June 12 and June 19 we couldn’t dock any ships due to infra-gravity waves rolling into the harbour, says Mr Gaddum.

“Long waves or infra-gravity waves cause problems in harbours around the world. These waves can’t be seen as they are usually masked by the sea and swell waves. But they can energise a moored ship and cause excessive movement and surging against the mooring lines.”

“When the time between wave peaks becomes extended we have issues in our port with ships becoming difficult to manage alongside the wharf, meaning we have to hold ships at the anchorage until the surge event passes.”

“Within our port we don’t have enough wharf frontage to berth two 200m vessels at once. We need to extend wharf 8 by about 80 metres to get both ships in safely and we need to do it now.”

Mr Sheldrake says standing at the southern end of the port gave him a chance to fully appreciate the port’s need to grow its capacity.

“It gave me, and other Chamber members who attended a real insight into what’s needed for the logging industry to continue to flourish for this city. I encourage other groups invited on the tour to take advantage of this unique opportunity and look behind the scenes.

More in this category: « Ports of Auckland: Best Seaport in Oceania 2017 World’s largest shipping line returns to Wellington »
back to top
Apr 30, 2018