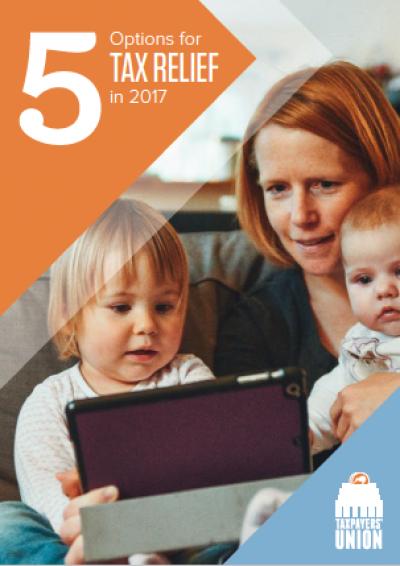 Report coverThe Government’s failure to index tax brackets to inflation since 2010 now costs the average Kiwi income earner almost $500 each year according to a new report released today by the Taxpayers’ Union. The report, "5 Options for Tax Relief in 2017", models five options to deliver meaningful tax relief packages which could be part of Budget 2017 with fiscal implications of $3 billion or less.

The report is available for viewing and download at www.taxpayers.org.nz/5_options.

Taxpayers’ Union Executive Director, Jordan Williams, says, “The National Government likes to talk the talk on lower taxes, but this report shows very clearly that they are simply not walking the walk. Because tax thresholds have not been adjusted with inflation, the average Kiwi worker is now paying $483 more per year in tax than in 2010.”

“By 2020, Government surpluses expected to be $8.5 billion per year. With Bill English having pumped $10.36 billion into new spending, and only $415 million allocated for tax relief in that time, if now isn’t time for meaningful tax relief it never will be.”

“In addition to modelling various options for tax relief to compensate New Zealand families who are paying more, the report calls for tax thresholds indexed to inflation going forward. That would prevent Wellington increasing the average tax rate paid by New Zealanders every year, raising extra revenue for the Government, in real terms, without the transparency of actually raising taxes.”

Budget allocations since 2010“If we instead indexed thresholds to the growth in average earnings, dating back to 2010, the average earner would save $1,350 each year, or $26 each week."

“With the Government set to make a decision on Budget 2017 and its tax relief package in the coming weeks, we hope this report gives taxpayers assistance in understanding what is realistic for Budget 2017.”

The paper was prepared by the Taxpayers’ Union, with input from Research Fellow, Jim Rose, former IRD head of policy, Robin Oliver, and a former team leader of revenue forecasting at Inland Revenue, Dr Michael Dunn.

5 Options for Tax Relief assumes the Government commits to a $3 billion tax relief package. When asked in 2016 how substantial a tax relief would be on the cards in 2017, John Key said "$3 billion I reckon".

The options with a fiscal impact of $3 billion or less which are modeled in the paper include:

More in this category: « McCully to visit the Gulf PM announces changes to ministerial portfolios »
back to top
May 18, 2018