Tim Groser on the High Road to Washington 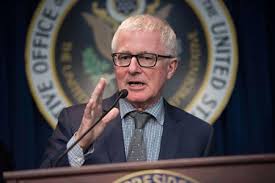 Tim Groser is pointed on the high road that leads to Washington and the New Zealand Embassy where another former minister of trade, Mike Moore, is currently doing his round of farewells.

In terms of the appointment Mr Groser enjoys the value of being a list government Member of Parliament.If he was an elected member, then the danger of a by-election would outweigh the value of his becoming His Excellency.Along with London, it is the Washington post that remains a political one. Mr Groser, an MP since 2005, in the Washington post will be in the box seat to continue his role as midwife to New Zealand’s transition into the Trans Pacific Partnership Agreement.Mr Groser has the ability to condense a mass of detail into something that can be easily assimilated by those who need to pick up in a hurry the broad picture. His background in amateur dramatics means that he is remembered by the people who need to remember him. He speaks French and a number of Eastern dialects.He will provide the seamless type of follow-through required in Washington as the reins are picked up from Mike Moore who, in his more boisterous way, has similarly long nurtured the TPPA.It is not so much the TPPA that requires incubating. It is the spirit of it. General tariff rates these days are less of a problem than currency fluctuations.Mr Groser knows as Mr Moore knows that the real problem is the unofficial barriers. We are talking here of everything from health and safety through to social equity and a sudden policy turn that upsets the United States. These are the real bumps in the international trade road.His elevation will also give his boss John Key the opportunity to stir some fresh blood into the operational upper echelon of his cabinet.An element that may stay Mr Groser’s appointment even at this late stage though is his conduct of his Climate Change portfolio. In charge of this catch-all of progressivism Mr Groser has played fortissimo, deftly navigating the government through all the grandstanding and eco-traps.He will be hard to replace.

From the MSCNewsWire Reporters' Desk

Published in THE REPORTERS DESK
More in this category: « Communists and Far Left Sidelined as France Uses Narrow Emergency Window to Quash Lethal Thugs & Back Up Peace, love and oil »
back to top